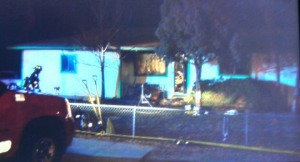 Boise firefighters rescued an unconscious woman from inside a bedroom in a burning duplex early Monday.

The two-alarm fire at a residence in the 4500 block of Collister Street was reported at 12:46 a.m. Crews from the department’s Collister and Glenwood stations responded to the initial alarms, with other crews also assisting.

Firefighters arrived to find the front of one of the units engulfed in flames, Battalion Chief Steve Rasulo said. Two of the three residents got themselves out, while firefighters entered through a bedroom window to rescue the woman.

The three residents, all adults, were taken to Saint Alphonsus Regional Medical Center for treatment. No details were available Monday morning on their conditions.

The second duplex unit sustained only minor smoke damage, Rasulo said. Neither of the two people who lived there were injured, he said.

The attack crews remained on the scene until about 3:30 a.m. Other firefighters remained through the night to prevent flareups.

The cause of the fire has not yet been determined, Rasulo said. Investigators returned after daybreak Monday to search for clues.