BURKE, Va. (AP) — Fairfax County firefighters have rescued a man from a burning home in Burke.

Fire department officials say firefighters were called to a home on Church Way just after 4 a.m. Wednesday. They found smoke coming from the garage, rear and second floor of the home and received reports of a person trapped on the second floor.

Firefighters located a man in a second floor bedroom and brought him down safely. The fire was brought under control within about 40 minutes.

The man was taken to a hospital for non-life threatening injuries. 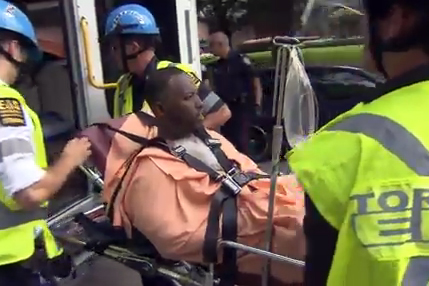 Toronto firefighters have rescued two construction workers who were trapped in a trench in North York on Friday.

Capt. Mike Strapko of Toronto Fire Services said eight trucks and 30 firefighters were involved in the rescue, which started around 1 p.m. on Misty Crescent, near York Mills Road and Bayview Avenue.

The men were in the front yard of a home under construction when the collapse happened.

Paramedics took the pair to Sunnybrook hospital as a precaution, along with a third man who had jumped in to help.

Strapko said they brought in special equipment for the operation, which was difficult because there could have been another collapse. 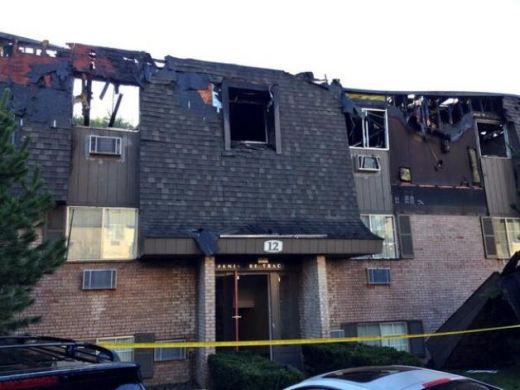 Above, in what she was certain would be her final minutes of life, Fri Annoh and her husband faced a terrifying choice.

They could choke down their panic, along with the deadly smoke filling their third-floor apartment, and will themselves to find a moment’s more patience, or toss their three-year-old daughter, Talia, into the pre-dawn darkness and — they hoped — the hands of the officers waiting three stories below.

“We wanted to see if we could send her out,” Annoh, 36, recalled Friday morning as she looked at the charred hulk of Building 12 at the Fenimore Trace Apartments on Route 2. “I thought I was going to die in there because the fire was really coming fast. … I don’t know if I’m ever going to recover from this.”

With escape into the interior hallway blocked by smoke pouring under a door that was scorching to the touch, Annoh’s husband, Benny Harrison, cast aside the window screen in a bedroom window, wrapped Talia in a blanket and thrust her out in search of some semblance of breathable air while, a few windows away, flames roared from a neighboring apartment.

“The father was about to throw (her) out to the cops,” Watervliet Fire Chief Scott Skinner said. “They said, ‘Hold on! Hold on!'”

The officers begged the panicked couple to wait a little longer until firefighters, led by rookie Watervliet firefighter Vinny Ellis, reached them with an extension ladder and pulled the family to safety, Skinner said.

The total number of people pulled to safety was said to be either five or six.

“It was an intense situation for the first 10 minutes,” Skinner said, adding that firefighters couldn’t even begin to fight the flames until everyone in the windows had been reached. “We were spending all our time rescuing people.”

All told, six people were treated for injuries, including smoke inhalation and a minor burn to one resident’s forearm, Skinner said. None of the injuries was believed to be serious.

Two-dozen people in 21 apartments — including those in adjoining building No. 11, which sustained heavy water damage — were at least temporarily displaced by the blaze and were being aided by the American Red Cross of Northeastern New York.

With the roof of No. 12 largely gone and parts of the third floor collapsing into the second, Skinner said demolition of the building — one of a dozen in the 144-unit complex owned by Tri-City Rentals — began Friday afternoon.

Skinner said firefighters stopped the flames’ advance on No. 11 by cutting a trench in a shared roof. Nearby Building No. 10 was also evacuated.

The fire is believed to have started in an occupied third-floor apartment in the front of the building and spread quickly through an attic space known as a cockloft, Skinner said. He said the tenant told investigators he was asleep when the fire broke out. Officials have no reason to believe the origin was suspicious, but due to the severe damage the cause will be officially listed as undetermined, Skinner said.

The first hint of trouble came at 3:23 a.m., when a passerby called 911 and reported hearing some kind of alarm in the area, Skinner said. But when a police officer responded, nothing could be found.

While Annoh was awakened by her smoke alarm, three floors below, Aniece Lembo had just drifted off to sleep as firefighters began banging on her door around 3:40 a.m.

“I hadn’t even had smoke in my apartment yet,” said Lembo, a 49-year-old motor coach driver who has lived in the complex for 15 years. “I didn’t even smell anything.”

Still dazed hours after the blaze that nearly claimed his family, Harrison stood in the parking lot and thanked the exhausted rescuers as he looked at the charred remains of his home and others hoped they could retrieve at least some of their belongings.

“This,” the fire chief told him, pointing to the still-steaming window he’d been pulled from, “it’s all stuff.”

An Anniston firefighter was recovering today after collapsing in an apartment complex fire he and 12 other firefighters responded to Sunday evening.

The fire occurred on the 400 block of South Allen Avenue. Four apartments were damaged but no residents were injured, a press release said.

Anniston fire Capt. Joel Roberts said 13 firefighters were sent to the scene around 6:48 p.m. Sunday. When they arrived, heavy smoke was visible from the front and the back of the apartment complex, according to the captain.

Firefighters entered from the back of the complex but had to stall because a firefighter lost his mask, according to Anniston fire Chief Tony Taylor. Taylor said the mask may have gotten caught in debris from the building.

After the firefighter’s mask was pulled away from his face, he fell to the floor and briefly lost consciousness, Taylor said. A mayday alarm was activated to signal that the firefighter was down, and the department was forced to stall its progress until the firefighter was safely out of the building, the press release said.

The firefighter was taken to Regional Medical Center for treatment by Anniston EMS and was released around 9:30 p.m. Sunday. He has no lasting injuries and is expected to return to work Wednesday, the chief said.

After the firefighter was taken to RMC, the others were able to put the blaze out within 15 minutes. The fire began in the kitchen of a ground-floor apartment, Taylor said.

The press release said there was heavy smoke and fire damage to one apartment and light smoke damage to at least three others. Firefighters put three families in touch with the Calhoun Cleburne Chapter of the American Red Cross Sunday evening to assist the families with the damaged apartments, the release said. Depending on the case, the Red Cross can give families things such as shelter, clothing and food.

According to Matthew Carrier, the emergency services specialist with the Calhoun Cleburne chapter of the American Red Cross, the local chapter assisted 12 adults and 12 children over the weekend.

The fire was caused accidentally, according to the press release.

Investigators are looking into the cause of an early-morning fire that sent an elderly man to hospital with serious injuries Tuesday.

Richmond Hill firefighters pulled the semi-conscious man out of a burning home on Lake Avenue, near Yonge Street and King Road, around 1:15 a.m.

He was in serious condition when paramedics rushed him to hospital.

The passersby encountered heavy smoke and were forced to retreat. They were taken to hospital with non-life-threatening injuries, Kraft said.

Fire officials report that Aurora firefighters were able to rescue a man stuck in a bathroom apartment during a Saturday morning fire.

Crews responded to a fire at River Park Apartments located at 439 Park Avenue in Aurora, IN around 11:57 a.m.

Aurora Police Department officers were first to arrive at the scene and reported heavy smoke coming from Apartment 25. Neighbors told officials that the tenant was possibly still inside the apartment and Aurora and Lawrenceburg firefighters entered the building upon arrival.

Heavy smoke conditions met firefighters at the entrance of the apartment; however, responders were able to safely locate the tenant, Clarence L. Baker, in the bathroom and carried him safely outside.

The fire was located on the stove and firefighters were able to extinguish it within minutes of entering the apartment.

Baker was transported to the University of Cincinnati hospital by Air Care. His medical condition is currently unknown. 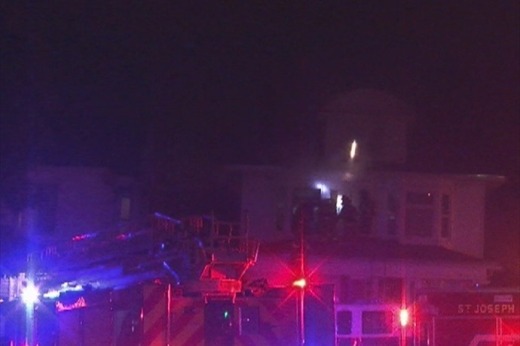 (ST. JOSEPH, Mo.) A fire broke out on the second floor of a St. Joseph home Monday night.

Firefighters responded to a house on the corner of 22nd and Jules streets.

The first crew to arrive rescued a man in a wheelchair who was unable to get out.

The fire department says inspectors are still investigating the cause of the fire.

The fire broke out at 6106 St. John Ave. and crews said the building was engulfed in flames when they arrived. The building houses Willie’s Burritos and has a two-story home attached, both of which were damaged in the fire.

Crews said they pulled a man out of the house. He is expected to be OK. 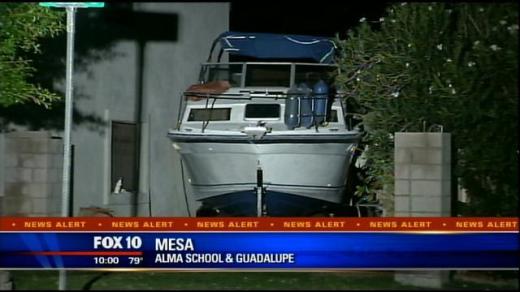 MESA, Ariz. – A man was pinned beneath his 8,000 pound boat as he was trying to get the boat onto a trailer Tuesday night.

This is near Alma School and Guadalupe in Mesa.

As he was lifting the boat onto that trailer, the jack slipped and he was trapped beneath it.

Neighbors rushed to help him but they couldn’t lift the boat. Firefighters arrived to help.

“We considered him in extremely critical condition, but during the transportation, our fire paramedics continued to assess, and during that period it appeared his level of consciousness increased and he started to show signs of being more alert,” said Mesa Fire PIO Forrest Smith.

The man was taken to the hospital in serious but stable condition.