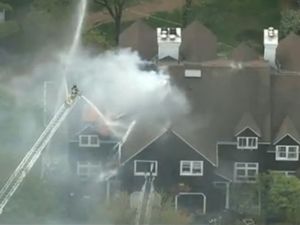 GREENBURGH – An explosion rocked a condominium at historic St. Andrew’s Golf Club on Wednesday, moments after firefighters rescued a seriously injured woman trapped in an elevator.

The apparent gas explosion occurred while Ardsley and Hastings-on-Hudson firefighters battled a blaze that had broken out just after 8:30 a.m. at 25 Turnberry Drive, condominiums that border the St. Andrew’s golf course off Old Jackson Avenue, officials said.

Firefighters freed the woman from the elevator on the second floor and were handing the 72-year-old off to other emergency workers for treatment when the building exploded, police said. Responders were on the scene for hours, bringing the situation under control by early afternoon with no other serious injuries reported, officials said.

The unidentified woman was taken to Westchester Medical Center to be treated for smoke inhalation. She was in guarded condition, officials said.