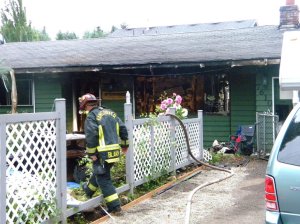 A Vancouver man is in critical condition after firefighters rescued him from a two-alarm fire that destroyed his Sifton neighborhood house Wednesday morning.

Vancouver firefighters were dispatched to a house fire at 7610 N.E. 142nd Ave. at 4:53 a.m. When they arrived, they found fire coming out the back of the single-story house. A woman standing outside told first responders that a man was still inside, said fire department Capt. Scott Willis.

The fire had also jumped to the neighboring house by way of a fence, Willis said.

“Anytime there’s a confirmed rescue and two residences involved, we go to a second alarm,” he said.

With both situations applying, the agency sent nearly all of its resources to the area.

“Crews went inside and lifted the person up and out of the house through a window,” Willis said.

Henderson was taken to PeaceHealth Southwest Medical Center. He was later transferred to the Legacy Oregon Burn Center, at the Legacy Emanuel campus in Portland, where he was listed in critical condition later in the day.

The fires at both residences were fully contained in about 30 to 40 minutes, Willis said.

During their efforts to suppress the fire and put out hot spots, two firefighters were shocked by electrical service to the house that hadn’t been turned off yet, Battalion Chief Rick Huffman said. They didn’t suffer any injuries.

Clark County Assistant Fire Marshal Richard Martin said the fire appeared to have originated at a food smoker on the back patio.

Damage to the involved house and its contents was estimated at $200,000. County property records indicate it is owned by George and Monette Henderson. The neighboring house, which had fire spread from the side of the house into the attic, sustained an estimated $75,000 in damage, Martin said. Property records show that home is owned by Terry Drake Jr. and Amber Lewis.

Neighbor Brett Heath said that he was awake and outside around 4:45 a.m. to let his dogs out but he didn’t notice anything unusual.

Five minutes later, his girlfriend told him it looked like Christmas outside because of the lights from the fire trucks and engines.

“We’re all just relieved to know that at the very least he’s alive,” Heath said.