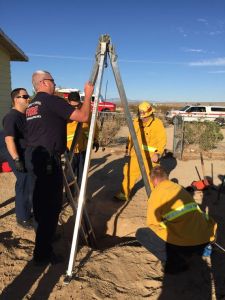 DESERT HEIGHTS — A Desert Heights man on Saturday Sept.  27, learned the dangers of unmarked pits after falling into and getting trapped inside a septic tank on his property in the 2400 block of Lear  Avenue.

He was rescued by Twentynine Palms firefighters and transported by ambulance to a local hospital.

Twentynine Palms firefighters from downtown fire station 421 were called to a report of a man trapped inside a septic tank at about 7:30 a.m.

Arriving firefighters determined the elderly man had fallen through an open septic tank lid and landed approximately ten feet down at the bottom of the pit.

Neighbors said they had not been able to contact the man since the prior evening and became concerned.

After searching his property several times, neighbors discovered the man’s cane next to the septic tank lid and found the man had fallen into the tank.

Twentynine Palms firefighters, with help from the Combat Center Fire Department, contacted the victim and provided him with medical aid before setting up a rescue system to hoist him out of the tank.

Crews had the victim removed from the tank in less than 20 minutes.

The victim was assessed and treated on scene for fall injuries and hypothermia before being transported by ambulance to a local hospital.