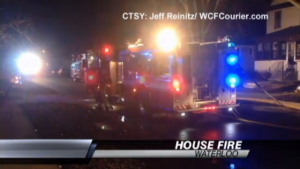 WATERLOO, Iowa (AP) — A house fire in Waterloo has sent two people to the hospital. Firefighters rescued a man and a woman from a burning Waterloo home early Saturday morning. Firefighters were called to the home around 3:30 a.m. Saturday. Upon their arrival, they found flames blocking the front door. Firefighters pulled one person from a side window and another through a back door. Battalion Chief Mike Jenn says three children in the house had already gotten out safely. Authorities have not released the identities or conditions of the two adults rescued. The cause of the fire hasn’t been determined, but police said it appeared suspicious. The city fire marshal is investigating.