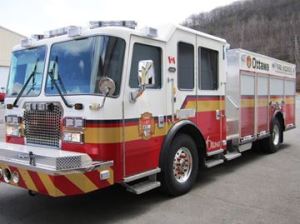 A 33-year-old male restaurant worker will likely lose his right hand after it was caught in an industrial meat grinder at a restaurant in the Billings Bridge community, paramedics say.

The man’s hand became stuck in an industrial meat grinder at a restaurant, located at 1223 Kilborn Ave., while the machine was in operation, on Thursday, April 16.

Two paramedics, a paramedic supervisor as well as seven firefighters from Station 35 in the Alta Vista neighbourhood were called at 1:22 p.m. Firefighters had to dismantle a portion of the meat grinder with hydraulic rescue tools.

“Part of the machine was still attached to him and we feared that if we were to take it off, we would do more damage, so it was (kept) in place until his arrival at hospital,” Trottier said.

“There’s techniques we can use to minimize the blood loss even though we don’t have access to the wound itself,” Trottier said, adding that a tourniquet can usually be used or, if possible, paramedics can pack bandages or gauze around the wound to stem the blood loss.

Though the worker would have been in unimaginable pain, Trottier said he was conscious throughout the extrication process. Emergency responders were on scene for about 30 minutes.

Fire crews have various sizes of hydraulic tools they can use for dismantling as well as to extricate trapped people, and in this case, a smaller device would have been deployed, said Capt. Bob Rainboth, Ottawa fire department spokesman.

“It would have been a unique way of using this tool, but probably one of the best tools to use for that circumstance, because it’s effective and quick,” said Rainboth. “(The tool) allows paramedics to be right by our side treating the patient as we’re extricating.”

The worker suffered significant blood loss, but paramedics reported that his vital signs were good. He was listed in serious but stable condition when he was admitted to the Civic campus of the Ottawa Hospital.