PARIS, Texas — A Paris man is fighting for his life after a fire trapped him inside his home.

It happened in the block of West Sherman and 15th Southwest around 10 o’clock last night.

A neighbor who made a life-saving phone call tells us how close this came to being a complete tragedy.

“Someone driving by knocked on the door and said my neighbor’s house was on fire,” said Jacob Langley, the victim’s next door neighbor.

Langley says he immediately called 911, then ran over to the burning house and began knocking out windows and doors to try to rescue his neighbor.

With flames rushing out of the home, the Paris fire department says their first priority was saving the man trapped inside who was found unconscious.

“Visibility was almost zero. You know, you can’t see your hand in front of your face hardly because the smoke is so dense,” said Paris Fire Deputy Chief Jerry Horton.

Langley told News 12 the victim and his wife had been saving up to go on a vacation and were planning to leave for Las Vegas and LA Friday.

Her husband is now critical condition. He was taken to a Paris hospital last night. One of his close friends says he’s now being treated at a Dallas hospital.

“I’m just hoping that he’s gonna make it through and praying, because he’s a really good man,” Langley told News 12.

The fire department says the home is heavily damaged but not a total loss. They believe the fire was accidental. The cause is still under investigation.

DIX HILLS, N.Y. (PIX11) — A Dix Hills resident is alive after being rescued by firefighters from his burning home on Saturday night, officials say.

Firefighters responded to the home on Kenmore Street around 11:25 p.m. First-responders spotted the man inside near a bedroom and dragged him to safety.

The patient was in cardiac arrest, but was revived by Dix Hills Rescue Squad who transported him to the Good Samaritan Hospital in West Islip.

One Dix Hills firefighter suffered a hand laceration battling the blaze and was transported to Huntington Hospital. Another firefighter was treated at the scene for smoke inhalation. A pet dog and cat perished in the fire.

The cause of the fire is under investigation. 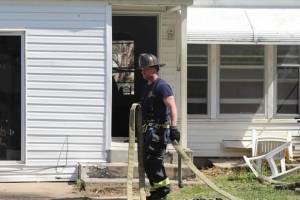 Wichita firefighters pulled a 33-year-old man through the window of a burning house Saturday afternoon in Wichita.

Firefighters arrived at a house fire in the 1000 block of North Pershing shortly before 1:30 p.m. and found smoke coming out of the building, Wichita Fire Battalion Chief Andy Cole said.

After entering the building, which is northwest of Central and Oliver, firefighters were able to locate the fire and contain it, he said.

Firefighters on the outside of the house began entering through windows to search the structure and located the man in a rear bedroom.

“They couldn’t come through where the smoke and the heat was, so they brought him out through the window,” Cole said.

Witnesses said a firefighter dived through the window “like Superman.”

“He acted like it wasn’t even a window,” said Lisa Cardona, who lives across the street from the house. “He saw someone in there and he just dove on in, no touching the window. He just, whoosh, goes on in.”

Two firefighters helped pull the man out of the window while the one who dived inside was pushing him out, Cardona said.

After he was out, firefighters got a chair and helped him walk over to it, she said.

Emergency Medical Services units came to the scene and transported the man, who had smoke-inhalation injuries, to Wesley Medical Center, a Sedgwick County emergency dispatcher said.

“It was really awesome to watch that – they saved someone’s life,” said Tiffany White, who was in town visiting relatives that live across the street. “I really want to thank the Wichita Fire Department. They really did a good job, and it was quick.”

The dispatcher said the man was “going to be fine.”

Coynisha Allen, who lives across the street, said she had seen something like the rescue only on TV.

“I’m happy he got out safe,” she said. “It’s real crazy seeing all the trucks and seeing how personal it can get, being right next to it. You don’t want to be next – have all the firetrucks in front of your house or you stuck in a house with smoke.”

Cole said investigators are still working to determine the cause of the fire as well as how much damage it caused.

He said his firefighters are trained to perform rescues like this, though it’s “like delivering a baby: It happens, but it’s just not that common.”

A 20 year old woman is recovering in the Intensive Care Unit of a local hospital after DC Firefighters brought her back to life.

According to sources familiar with the story the woman was trapped inside a smoke filled house in the 700 block of 19th Street NE a week ago Friday and was not breathing when she was found.

In this photo, Paramedic Zak Wright is breathing life into the woman as firefighters Jayme Heflin, Adam Turner and Lt. Scott Richardson assist.

The woman was pulled out of the house by firefighter Gerell Lockett.

We’re told the Paramedic who saved the woman paid her a visit in the hospital today.

Officials said the fire broke out around 9:15 p.m. at The Preserve at Owings Crossing apartment complex in the 100 block of Caraway Road.

Firefighters said flames were shooting through the roof of the building when they arrived and they requested a second alarm.

When firefighters first arrived on the scene, they noticed heavy fire and called for a second alarm.

Firefighters rescued seven people and a dog from the second and third floors of the building. Officials said 10 people were injured. Four of those people were taken to area hospitals for treatment of non-life-threatening injuries. No firefighters were injured while fighting the fire.

The fire was brought under control at 9:51 p.m.

Fire investigators determined that the fire was accidental and was caused by a candle that had fallen over in a second-floor apartment. About 12 apartments were damaged.

The Red Cross has assisted as many as 36 displaced residents.

Officials said about 39 pieces of Baltimore County Fire Department equipment and 75 firefighters were assigned to the call.

The front of the duplex, which is owned by John and Jennifer Crisan of 125 Dean St., already was engulfed in flames upon firefighters’ arrival.

Initial reports indicated that two occupants of 123 Dean St. — Robert and Denise Matteson — were on a roof of the rear portion of the house, firefighters said.

Ground ladders were used in the couple’s rescue, and Denise Matteson was taken to Rome Memorial Hospital for smoke inhalation, officials said.

Another ladder was placed upon 125 Dean St. with assistance from neighbors for another possible rescue, but the remaining occupant there was assisted by firefighters and exited via interior stairs.

American Red Cross officials were called to the scene and assisted seven residents of 123 Dean St. and three from 125 Dean St., officials said.

Firefighters had the fire under control in about 45 minutes, and helped limit major damage to the building. There was fire and smoke damage to the front porch, vinyl siding and first and second floors of 123 Dean St. There was minor smoke and water damage to 125 Dean St.

There was about $75,000 worth of damage to the building and its contents, firefighters said. Cause of the fire is under investigation.

National Grid and Rome police also were at the scene. 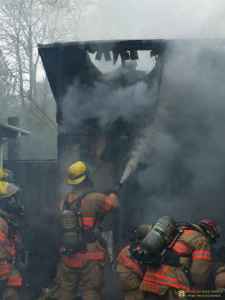 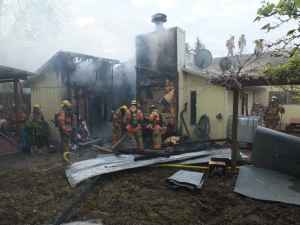 Firefighters had to rescue a woman from a house fire at 9:11 a.m. on Thursday.

Firefighters say while they were searching the home, they heard a woman calling for help from the second floor. Firefighters quickly carried the woman out of the house.

The woman, whose name has not been released, was treated by paramedics and then taken to a nearby hospital for minor smoke inhalation.

A neighbor says his dog alerted him to the fire.

“Then my dog start barking, I looked out and all of the sudden the whole back was full of smoke and I thought their shed was on fire and then I noticed, oh no it’s worse than that,” neighbor Tim Miller said. “So I get ready to come in and grab my fire extinguisher, but I thought well that ain’t gonna do any good, then two seconds later the fire department shows up.”

The cause of the fire is still under investigation. 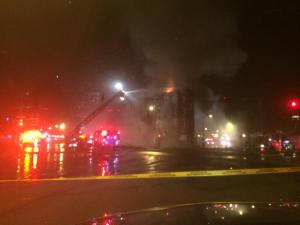 HARTFORD, Conn. (WTNH)– Hartford firefighters put out a massive fire and rescued a man from a burning building on Main Street this morning.  Main Street and a Magnet School are closed.

The fire is officially out at 1363 Main Street, which is a vacant building.  The Deputy Chief told News 8 that a passerby reported smoke around 3:45 a.m.  When crews got there, they said there was a man hanging out of the second floor window with a great deal of smoke behind him. Firefighters were able to rescue him and he was taken to the hospital. His condition is unknown at this time. His identity and why he was in the vacant building is also unknown.

Main Street is closed in both directions just north of downtown. Rt 44 Albany Avenue is closed at the intersection with Main Street. Capital Preparatory Magnet School at 1304 Main Street is also closed for the day due to the fire, which is across the street from the school.

While the fire is out, crews are still on scene dousing the four story building with water to stop the hot spots from flaring up again. 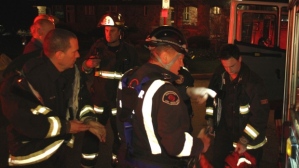 “The trails out here are dark, we got reports of someone falling off a cliff,” Coroliuc said.

But the hovercraft and helicopter were not required, after emergency crews found the young woman capable of getting herself out of the woods

A woman and two children had to be rescued from their second-floor suite after a big fire broke out in an apartment on Young Street between Sargent and Ellice.

Platoon Chief Frank Leswik said it was a dramatic scene they arrived at around 5:30 am.

“They had one lady hanging out of the window. Got a ladder up, got her out and two children,” he says.

The Chief says it’s an intense moment for crews.

“It happens very quickly. You react to the training you’ve been given and the results were good,” he said.

The woman and children were taken to hospital, but Lewsik says they’re ok.

Early damage estimates are pegged at $500,000. The building is badly damaged by the smoke and flames