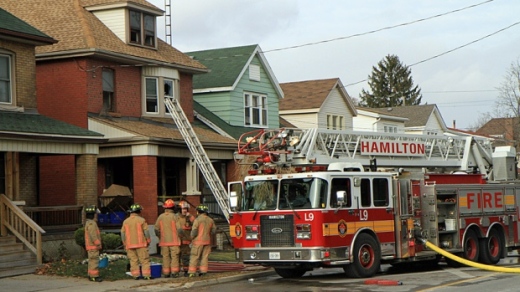 Firefighters have saved a Hamilton woman’s life in a dramatic rescue at a two-storey home on Gage Avenue.

Hamilton firefighters arrived at 58 Gage Ave. S. just before noon Thursday after reports of a fire. Hearing that someone was still inside, three firefighters went into the house and crept blindly through the basement to rescue a 53-year-old woman trapped there, says Claudio Mostacci, public information officer with the Hamilton Fire Department.

The fire was intense, Mostacci said. In situations like that, firefighters are creeping through smoke so thick can barely see in front of their faces. The heat was intense and draining — so severe —Mostacci said, that initial reports said they were injured.

The fire climbed the walls around them. By the time they entered the basement, the flames had spread to the first floor, and the basement ceiling was on the verge of collapsing.

“People wouldn’t believe what those guys went through today to get in there,” Mostacci said.

About 30 firefighters responded to the fire. When the first crews arrived, the woman’s two daughters were in the front yard, and told the crews that their mom was still in the basement.

A captain and two other firefighters went into the house to do search and rescue, Mostacci said. They groped though smoke and intense heat to find the woman. Ten minutes later, they carried her out.

In moments like that, “you’re not really thinking about your own safety,” Mostacci said. “You’re just doing your job. You get in the moment and you have a task to do.”

The Office of the Ontario Fire Marshal is investigating. The home is essentially destroyed, suffering around $300,000 in damage.

The woman had no vital signs when she was pulled from the home, said Det. Const. Greg Slack of Hamilton Police Service. Emergency crews revived her and she is now in hospital in critical condition.

Neighbour Les Dykstra lives a couple of houses away. He was asleep when the fire broke out. He said he knows the family enough to wave and say hello.

“It’s too bad about the house. It’s a nice place, you know.”