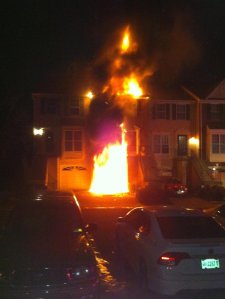 Fire officials in Fairfax County are working to determine what started a 2-alarm fire that gutted a townhome in the Mt. Vernon section of Alexandria Monday morning.

Firefighters were called to the 8500 block of Towne Manor Court around 3 a.m. When crews arrived, they found fire coming from all three floors of the home and learned that a male occupant was trapped on the third floor of the home.

Firefighters used ladders and took out a rear window to rescue the man. A second man, who was able to escape the fire unharmed, told News4’s Melissa Mollet that he believes the home’s dryer may have started the blaze.

Clifford Ward said he and his partner, Jeff, have lived in the home for about a year with their five dogs. Ward said they recently had someone out to fix the dryer last week after it began smoking.

He recalled what happened Monday morning for News4.

“We were in bed, and he went downstairs to check on one of the dogs then he started screaming, ‘No, no’ and ‘Fire,’ Clifford Ward said.

Ward said he believes Jeff went back to the third floor to look for one of their dogs when he became trapped.

“The police came first…and told me to get away from the house, don’t go back in,” Ward recalled.

Jeff was transported to an area hospital, with severe smoke inhalation. His condition is not known at this time.

While Ward believes the dryer may be to blame, fire investigators have not determined what caused the fire.