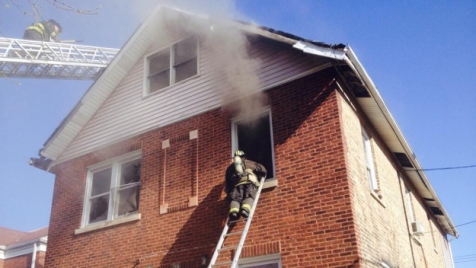 April 22, 2014 (CHICAGO) (WLS) — Firefighters pulled 73-year-old Paul Fomby to safety through a second-story window at his burning home in the Roseland neighborhood.

Chicago Fire Department firefighters arrived around 9 a.m. Tuesday to the burning home in the 700-block of East 105th Street. The rest of the tenants in the two-flat were already out of the building, but Fomby was trapped in an upstairs front bedroom. Neighbors saw him waving his arms and calling for help.

“I ran across the street to get my mask ’cause I was going to go in there and get him myself,” said Christopher Kelly, a neighbor, “but the smoke was so thick I couldn’t get in there.”

Firefighters had to feel their way through thick smoke to locate Fomby, and determined carrying him out through the window was safer than taking him down the stairs.

“We’re protected from the heat but the civilian isn’t,” said Mike Rowan of CFD. “So you bring him into a 400-degree room and he certainly will die.”

Firefighters inside and outside the building coordinated the rescue effort, and Mark Cavaletti carried him down the ladder.

“They did all the hard work,” said Cavaletti. “They got him to the window and all I did was carry him down the ladder.”

Fomby’s son, Reginald, arrived at the hospital shortly after he was admitted. Fomby is currently in stable condition.

A pit bull who was also rescued from the fire is unharmed, as are her six puppies. The cause of the fire was determined to be electrical.