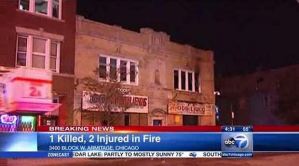 A woman died and two others were injured after a Logan Square storefront they had been occupying caught fire Thursday night, according to authorities.

A mattress in a back bedroom of the building, in the 3400 block of West Armitage Avenue, caught fire about 11:40 p.m.

A fire crew arrived four minutes after the first 911 call and entered the front through heavy smoke and found all three “pretty quick,” according to a Chicago Fire Department spokesman.

The woman was taken to Norwegian American Hospital and pronounced dead. She was in her 40s, according to police. The Cook County medical examiner’s office wouldn’t say whether they were notified of a death connected with this incident.

Two others, both men, were taken to John H. Stroger Jr. Hospital of Cook County. One, whose age wasn’t available, is alert and talking. The other, in his 60s, had burns to 30 percent of his body and is now intubated.

The building had been vacant for six months, authorities said, and it appears the three had been illegally occupying the apartment for a few months because of the amount of liquor bottles and drug paraphernalia found by firefighters.