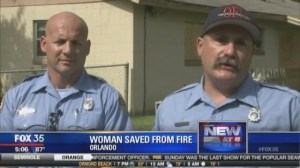 They were checking to see if homeowners had working smoke detectors.

Firefighters got a call at around 1 a.m. Monday about the fire on Margie Court.

“The entire house was smoke-filled,” said firefighter Ray Cordero. “The entire kitchen was on fire, and there was smoke coming out of all of the windows.”

Cordero and engine-mate Rob Petroff are two of the local heroes who saved a woman trapped inside the burning home.

“Our dispatch had good information that they did have someone trapped inside, so we really gear up to do a good search,” Petroff said.

“It just makes you want to get them out as fast as you can, and you want to make sure you do everything right,” Cordero said.

When the pair of firefighters got around to the back of the house, they found the woman, face-pressed up against the bathroom window gasping for air. They were able to calm her down and direct her over to a larger window, where they shattered the glass and pulled her out safely.

Within 11 minutes, that woman was out of danger and getting urgent medical care.

“We’re all proud.” Petroff said. “We’re a service to the community and we came in and did our job.”

Although they have decades of experience between them, it was the first time in their careers Petroff and Cordero rescued someone from a burning building.

Firefighters believe that fire started accidentally in the kitchen of the home.

The woman, whose name is not being released, is being evaluated for smoke inhalation, but is expected to make a full recovery.