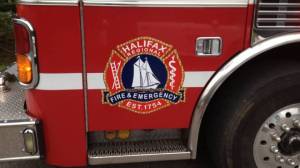 A woman was uninjured in a fire at her East Ship Harbour home Friday morning.

Firefighters found the woman upstairs in the one-and-a-half-storey home while a fire burned downstairs, but gave firefighters some hassle when they tried to rescue her, division commander Mike Blackburn said.

“We have reason to believe she may have known fire was going on the first floor, and (she) wasn’t co-operative with firefighters when we did arrive,” Blackburn said.

RCMP spokeswoman Const. Heidi Stevenson said the woman was detained under the Involuntary Psychiatric Assessment Act and is being assessed in hospital. The woman was alert and conscious when removed from the home, Stevenson said.

The fire started in a stove and spread from there, but there is no indication that the fire was intentional, Stevenson said.

The flames were extinguished quickly and contained to the one room, Blackburn said.