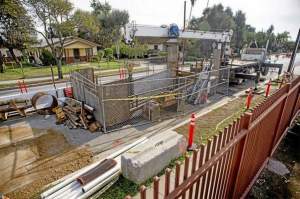 SAN GABRIEL >> Firefighters rescued a worker who fell 20 feet while climbing down a construction site on Monday morning.

The rescue occurred on Main and Ramona streets at the Alameda Corridor East (ACE) railroad grade separation project at 9:35 a.m.

Frawley said the fire department got a call at 8:11 a.m. for a “confined space rescue.” He said a worker was climbing down a ladder inside the shaft, slipped and fell down about 20 feet.

The hole is about 40 feet deep.

Paramedics went down the site to where the victim lay.

“We suspect his leg may be broken. We splinted it,” Frawley said.

He said the worker was put on a stretcher, hoisted out and then transported to Huntington Hospital in Pasadena.

The man was in stable condition, talking and alert, according to the fire chief.

There was a second worker with the victim. Frawley said this worker climbed down the hole to provide support to the injured man.

The injured worker was a subcontractor with Golden State Boring & Pipejacking of Ontario and was working on the ACE railroad grade separation project, said Paul Hubler, ACE spokesman. Hubler said he was working in an underground utility relocation pit.

“Our foremost concern is for the worker who was injured and we are relieved that his injuries are reported as non-life-threatening,” said ACE Construction Authority CEO Mark Christoffels in a statement.

ACE is investigating the incident to make sure nothing like this happens again, Christoffels said.

The San Gabriel Trench project, estimated at $337 million, will result in the lowering of a 1.4-mile section of Union Pacific railroad track in a 30-foot-deep, 65-foot-wide trench with bridges being constructed at Ramona Street, Mission Road, Del Mar Avenue and San Gabriel Boulevard, allowing vehicles and pedestrians to pass over the tracks.