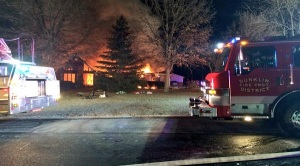 That fire broke out inside a home in the 100 block of Sunnybrook Drive, near Festus, around 4:30 a.m. Heavy flames were seen coming from the home.

When firefighters arrived, a 62-year-old women alerted the crews that two people were inside. Firefighters were able to enter the home and bring the two victims to safety.

Medical helicopters flew both victims to a St. Louis hospital, where they are listed as stable, Chief Gary McClain of the Dunklin Fire and Rescue told News 4.

The chief believes the cause of the fire was the home’s furnace. The chief noted that due to the cold temperatures, fighting this fire has become a challenge. Water has been brought to the scene by tanker trucks due to not having fire hydrants in the area.