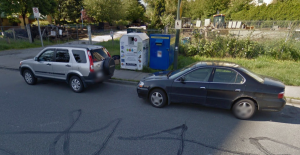 Perhaps he tried to donate himself to charity? Firefighters used the ‘jaws of life’ to rescue a man that had trapped himself inside a metal donation bin in New Westminster.

The incident occurred at approximately 4 a.m. on Friday when nearby condo residents on Quayside Drive called 9-1-1 after hearing screams for help.

New Westminster Police officers were first to arrive at the street-side donation bin belonging to the Developmental Disabilities Association. Firefighters were called to the scene when police were unable to free the man, according to CBC.

The man told CTV that his weight caused him to fall in, but once he was inside he could not find a way to get himself out of the bin.

He did not incur any injuries in the incident, was not charged by police for theft or damage, and was permitted to walk away from the scene.

The Developmental Disabilities Association owns numerous donation bins across the Metro Vancouver region. These bins accept clothing, shoes, linen, toys and non-breakable housewares, which are later collected and sold at Value Village thrift stores. All proceeds return to the charity to help funds its community-based programs and services to children and adults with developmental disabilities.

However, this is not the first time a human donation was made to a Developmental Disabilities Association donation bin. In August 2014, a young man in his 20s had to be rescued by firefighters after he crawled inside a Vancouver bin for more than three hours. When he emerged out of the bin, he was not wearing any pants.