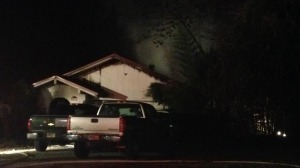 HUNTSVILLE, Ala. (WHNT)- A man was taken to the hospital with serious injuries after being caught inside his burning home late Saturday night.

On arrival, Engine 14 reported heavy fire conditions showing from the rear of the one story house. A bystander advised crews that a person was trapped inside the home.

Firefighters immediately entered the residence with a charged hose line and began to search for the person. Inside the home they encountered heavy smoke and flames. After a brief search firefighters were able to locate the person and carry him outside. It took crews about 20 minutes to contain the fire but it had already spread though most of the home.

The patient was transported to Huntsville Hospital in serious condition.

A bystander and her daughter were driving by and saw the flames. They stopped and helped two other people from the house to safety.

Huntsville Fire & Rescue responded to the scene with four engines and a ladder truck. Firefighters were on the scene for about three hours.