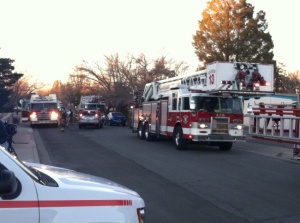 ALBUQUERQUE (KRQE) – A man is recovering after being rescued from his burning apartment Friday. When responders arrived at the 700 block of Truman Street around 4:00 p.m. they found an unconscious 60-year-old man and two dead dogs inside the affected apartment.

He was quickly flown to an area hospital; his condition is not known at this time. A neighbor says he grabbed a garden house and tried to extinguish the flames. Even though firefighters were able to contain the fire to one unit, three people are without a home Friday night.

The cause of the fire is under investigation.