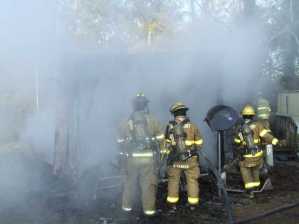 Beyerstedt said the man was initially taken to Memorial Hospital at Gulfport but was moved to USA Medical Center’s burn unit.

“Doctors have told us his condition is serious but guarded,” he said.

Beyerstedt said the fire started about 7 a.m., and nearby Fire Station 7 crews saw smoke billowing over some trees. When crews arrived, one man and his dog were trapped inside. The man was pulled out of the front of the home and was not breathing.

Crews performed CPR and resuscitated the man, but could not reach the dog, who died in the fire.

“Crews worked to bring him back and hopefully he can make it,” Beyerstedt said of the man. “I’m just glad we got there in time to do what we could to save this man’s life.”

Firefighters had the fire out in about 30 minutes.