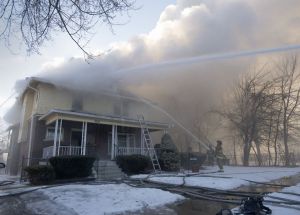 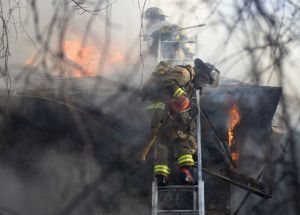 SAGINAW, MI — A 61-year-old man was flown from a Saginaw hospital to a burn unit at Hurley Medical Center after he inhaled smoke while escaping a burning home in Saginaw.

Firefighters responded to the call about a burning house about 8:10 a.m. Monday, Jan. 26, on Owen near East Holland, and the first responders saw two people on the roof of the porch yelling for help, officials said.

A firefighter positioned a ladder leading from the porch roof to the ground, allowing the two people, a 44-year-old woman and her 15-year-old son, to escape safely.

A 61-year-old man, who was inside the home on the first level when the blaze started, was initially treated for smoke inhalation at a Saginaw hospital and later airlifted for treatment at the burn unit at Hurley Medical Center in Flint, Fire Marshal Ralph Martin said. Officials could not give an update about the man’s condition.

Martin said the woman on the porch roof was alerted by smoke detectors going off in the house. Investigators believe she may have went downstairs to alert the 61-year-old man before going back upstairs and becoming trapped as the fire spread, Martin said.

Saginaw firefighters pour water onto a burning house at 1408 Owen in Saginaw, Monday morning, Jan. 26, 2015. The stubborn fire took several hours for the fire department to extinguish after flames made their way into the home’s attic and caused the roof to collapse. Two women who lived there were rescued from the porch roof and a third person was taken to a hospital.Jeff Schrier | Mlive.com

Filary said officials believe the fire started in the kitchen area in the rear of the house. The “balloon style” construction was one factor that made the blaze a challenge to fight, he said, noting that the studs in some older homes go from the main level to the attic, allowing fires to spread quickly in the walls.

After an initial knock down, firefighters were fighting from inside and outside the home, until the fire began again in the attic, prompting firefighters to evacuate the building.

Firefighters worked at the location for more than three hours, he said. The cause is under investigation.

A firefighter suffered a minor ankle injury while on scene, Martin said, and he was checked out by medical workers.

Firefighters always respond to get to a fire as quickly as possible, while taking weather conditions into account, Filary said, but if they learn someone is possibly trapped, it gives them a kick of adrenaline.

“Your adrenaline kicks up to a higher gear,” he said. “It helps you in a way. There’s definitely a heightened sense of urgency. Afterward, it gives you a really good feeling of accomplishment.”