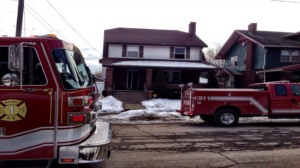 NEW CASTLE, Pa. (WKBN) – A woman and her pets were rescued from a house fire in New Castle Wednesday afternoon.

Crews were called about 12 p.m. to a house on Winter Street.

A woman who was on the second floor and her pets were rescued by firefighters.

The woman was taken to the hospital where she is being treated for smoke inhalation.

Fire firefighters believe the flames broke out on the first floor.

The fire marshal is investigating.