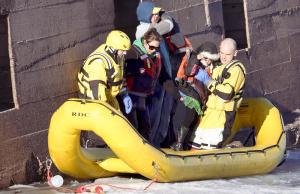 Duluth firefighters rescued two adults and two children from the cribs, offshore from Canal Park, on Tuesday after the group started breaking through the Lake Superior ice while trying to explore the ruins.

The ice provided a walkway for people to explore the cribs — also known as Uncle Harvey’s Mausoleum or the icehouse — for much of the winter, but more than a week of above-freezing temperatures has caused the icy pathway to thin.

The St. Louis County Sheriff’s Office reported that Superior residents Melissa Besvold, 34, and Brian Bridge, 37, along with a 6-year-old girl and a 11-year-old girl, attempted to walk to the cribs when Besvold broke through thin ice. Besvold, Bridge and the two children were able to reach the offshore structure. Rescue crews received a call for help just after 5:30 p.m.

A crowd of passersby stopped to watch the rescue from the Lakewalk as firefighters donned yellow cold-water rescue suits and brought the four people life jackets to wear as they waited on the south side of the cribs for their turn to be ferried back across Lake Superior’s thin ice. All four made it to safety, two at a time, in a raft pulled back to shore with the help of a firefighter guiding it over the ice.

Within a half-hour of the initial call the four people were brought to a waiting Gold Cross Ambulance, with rescuers carrying one of the girls over the large rocks and Besvold making her way there in wet clothing.

No injuries were reported, but the four people were wet, cold and scared, Herman said.

The U.S. Coast Guard arrived and stood on the Lakewalk with its raft on standby in case it was needed. The St. Louis County Rescue Squad also initially responded to the scene.

Herman said anyone wanting to walk out to the icehouse will need to wait until next winter; the lake ice is moving and unsafe to walk on.

The cribs or “mausoleum” was built in the late 1910s as part of a short-lived sand- and gravel-unloading dock. In more recent years the ruins have been a much-photographed landmark along the Lakewalk, a magnet for summer swimmers and winter walkers.