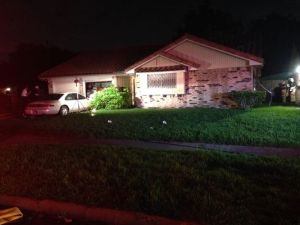 HOUSTON – A woman was rescued after her home caught fire by firefighters and quick-thinking neighbors.

Barbara Howard, a neighbor, thought someone was barbecuing inside the home.

“So I went across the street and actually seen the fire coming out the window so we knocked on the door to make sure if anybody was inside or not. A lady across the street said there was somebody inside, so we called 911.”

Firefighters found the woman lying on the living room floor.

She was taken out of the home by firefighters and was treated for smoke inhalation, according to a family member.

The woman was taken to Memorial Hermann Hospital. Her condition is unknown at this time. The flames were contained to the front bedroom of the home and it is unknown what may have caught the fire.