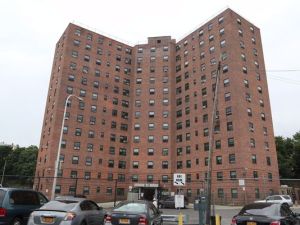 YONKERS – A semi-conscious man was rescued from his burning apartment Saturday morning by a city fire lieutenant who crawled past the flames to save him.

“Lt. (Bill) Roza did a great job. He assessed the situation, acted quickly and was able to save a life,” Yonkers Assistant Fire Chief John Flynn said of the rescue, which took place shortly after 8 a.m. in a seventh-floor apartment at 80 School St.

Roza and the man he saved, who was not identified, were both taken to Jacobi Medical Center in the Bronx, where they were being treated for smoke inhalation.

Flynn said the fire was contained to one apartment in the 12-story building. He said smoke was coming from windows when firefighters arrived. After forcing open the door, they found fire in the living room.

While others attacked the fire Roza crawled past the flames, forced open a bedroom door and found the man lying in bed. Sharing his air pack, Roza led the victim out of the building to safety.

“They were both walking and talking once they got outside, so I think they’re both going to be OK,” Flynn said.

He said about 45 firefighters responded to the blaze, which was quickly extinguished thanks to “an aggressive attack.”

One firefighter suffered an unspecified minor injury and was taken to St. Joseph’s Medical Center in Yonkers; several other seventh-floor residents were treated at the scene for minor smoke inhalation but were not taken to the hospital.

The cause of the fire is under investigation. Authorities said it appears to have been accidental, and was possibly caused by smoking.