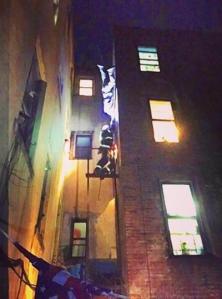 Firefighters saved a man dangling by his legs from wires three stories above the ground after he fell off a Brooklyn rooftop and got entangled on his way down, FDNY officials said Wednesday.

When fire trucks arrived on Hooper St. near S. 2nd St. in Williamsburg about 7 p.m. Tuesday, smoke-eaters were shocked to see the man hanging precariously above them.

“We could see that he was hanging by little more than a cable wire,” said firefighter Joe Andres, 26.

“We had some unsuccessful attempts to bring him in through a window.”

When that failed Andres shimmied up the building’s four-story facade and was then lowered down by another firefighter from the roof with a rope secured to a harness around his waist.

“There were obstacles in the way,” Andres said.

“As soon as I got even with him I basically bear hugged the victim. I was thinking, ‘Don’t let this guy go. No mater what happens just hold onto him.’”

Other rescuers from Ladder 108 and Engine 216 were working to secure the victim so he wouldn’t fall during the rescue, said Capt. Daniel Keane, 42, of Staten Island, who led the operation.

“The roof-rope rescue was our only option,” Keane said, calling the operation rare.

“The objective was for him to grab the victim. (The victim) could have dropped at any point. We didn’t know when the cable wire was going to snap.”

Firefighter Matt Regis, 43, said he helped assure the victim that everything would be all right while tying a piece of webbing around him to secure him.

“I was trying to keep him calmed down,” Regis said.

“He told me that he was on the roof and fell. There was a piece of cable wire that was across his knee and toes on one leg. It was unreal.”