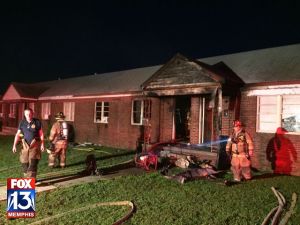 Two infants and a 10-year-old were rescued from an apartment fire Friday morning in West Memphis.

Investigators say the flames erupted just after 5:06 a.m. in the 100 block of Stuart Ave. It was a wakeup call neighbors never expected.

“When I came to the door, I saw that my neighbor’s house was on fire and the flames was coming out the door,” neighbor Stacey Tuggle said.

The morning chaos is something she will never forget.

“She was yelling ‘can somebody help me, can anybody help me,’ and I got my phone and called 911,” Tuggle said.

A mother and her three kids, ages two-months, 14-months and 10-year-old, were trapped inside until emergency crews got to the scene.

“When they brought the 10-year-old out, she was unresponsive and they had to give her CPR,” Tuggle said.

Donald Anderson is the girls’ grandfather. He said the 10-year-old suffered second degree burns and was flow to a children’s hospital.

Anderson spoke with daughter just minutes after the fire was put out.

“She said she smelled smoke in here; she saw fire coming from the top of it, and they got everybody out,” Anderson said. “They busted through the windows out to get the kids out.”

Anderson said his daughter and grandchildren moved into the home just last week.

“I got my prayers for everything that’s going on right now, because they just lost everything in their house,” Anderson said.

The cause of the fire has not been determined at this point. The family claims they notified management about possible electrical issues.