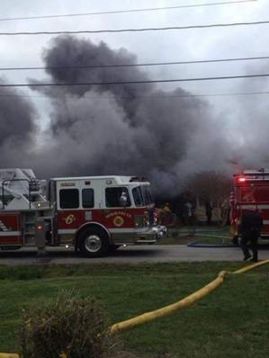 BERLIN, Md. – A mother and her 6-year-old daughter were rescued from a burning home Thursday evening in the 100 block of Branch St.

Berlin resident Tocarra Derrickson, 31, was in critical but stable condition Friday morning at the Bayview Burn Center in Baltimore. Her daughter was not injured.

Two Berlin police officers were treated for smoke inhalation and two firefighters were treated for minor injuries following the fire in the two-story home about 6 p.m. Fire companies from Berlin, Showell, Ocean City, Ocean Pines and Newark responded to the blaze.

McMahon said the fire is still under investigation. Just before firefighters arrived, two Berlin police officers rescued the child by breaking a window and pulling her to safety. Heavy smoke and flames were venting from the front of the home.

Derrickson, who was on the phone with 911, was trapped on the second floor, McMahon said. She collapsed but was rescued by firefighters. She was taken to Atlantic General Hospital and then Johns Hopkins in Baltimore. Early Friday she was transferred to the burn center, according to McMahon.

McMahon said the fire was centered in the living room area of the five-bedroom home, which is owned by Derrickson’s parents, Gerald and Marcelle Derrickson. Derrickson and her daughter were the only ones home at the time of the fire.