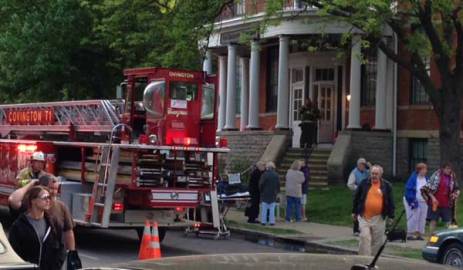 Firefighters were able to rescue a man from a burning apartment building in Covington, Kentucky on Tuesday morning. Officials say that a brownout had been implemented on the nearest fire department. However, a neighboring department was able to arrive on scene in a timely matter.

Firefighters say that an ongoing dispute with the city has not been solved. Since 2011, fire stations in Covington have been under brownouts.

What is a brownout?

Firefighters were called to the 700 block of Greenup Street around 6:30 p.m. Tuesday morning. Officials say the blaze started when a couch caught fire at an apartment building for senior citizens.

Crews say that first responders arrived within three minutes. Firefighters were able to quickly contain the fire and rescue a man caught in a second floor hallway.

“Well, we had quite a few fire trucks and firemen here. They stopped the traffic so they could tend to business,” explains Halle Gaskins, a resident of the apartment building.

Despite the brownout, residents are happy with the response from authorities.

“They were quick to respond and very courteous,” says Gaskins. “Nobody freaked out because of their demeanor. Very good and very professional.”

The man rescued from the fire was treated at the scene. He is expected to make a full recovery.