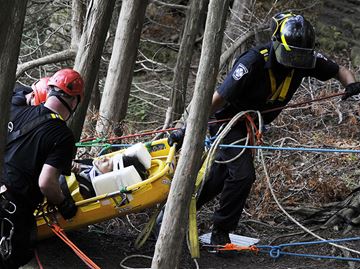 Burlington firefighters had to effect a high-angle rope rescue of a woman in her 20s after she had fallen off a cliff at Mount Nemo this afternoon.

Although an Ornge helicopter was initially called to the scene, the order was later cancelled.

After rescuers reached the woman, she was placed in a stokes basket and then hauled up the side of the escarpment by a team of firefighters.

Once raised to the top, Halton EMS paramedics assessed the woman’s condition before preparing her to be transported by ambulance.