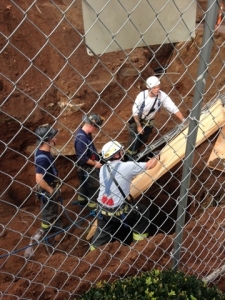 Eight firefighters, a Yale-New Haven doc and a paramedic rescued a worker trapped in dirt up to his waist in a collapsed trench Tuesday morning. They couldn’t climb right in—or else they would have risked creating a second problem.

Firefighters got the call at 9:15 a.m. that the trench had collapsed and four workers, who had been repairing a corroded steam line, were trapped inside.

Two workers had been helped out of the hole by the time firefighters arrived, according to Battalion Chief William Gould. A third worker was then easily helped out.

But the fourth was stuck, and in distress.

The hole was about seven feet deep, maybe eight feet across and 12 feet long, Gould estimated. The worker’s legs were buried in the dirt.

Gould described what happened next:

The firefighters couldn’t just climb in. It was too dangerous—they could prompt a second collapse in the process.

So first they put plywood “ground pads” around the edge of the trench, to support their weight without loosening more dirt to cave in. Then they placed heavy-duty wood panels inside along the trench’s walls. Finally they used pneumatic tubes as struts across the trench to hold the panels in place.

Now they could go in.

The firefighters climbed down a ladder and starting digging out the dirt by hand around the worker’s legs. Eight firefighters rotated on the task: Ed Taylor, Mike Milano, Mark Vendetto, Mike Gardin, Tim Papp, Ken Nolan and Lts. Karl Luschenat and Christopher Parker.

“He was conscious and alert,” Gould said of the trapped worker. “His legs were in there pretty good. He was a little anxious to say the least.”

The firefighters finished digging out the worker by 10 a.m.

A Yale-New Haven Hospital surgeon, David Cohen, then climbed down into the trench with paramedic Angel Avilas, to assess the worker. He determined that the worker was in good enough shape to climb up the ladder to safety with the help of firefighters, which he did.

It could have turned out differently.

“They could have very easily been buried very quickly,” Gould said. “The weight of the soil, without oxygen—after four to six minutes their survival chances would have been very slim.”

Gould called this type of rescue “extremely dangerous. It requires specialized training and equipment. It requires members to complete a course to operate as a trench rescue technician.”

The cause of the trench collapse is under review. Gould said he noticed two apparent safety violations at the scene: The “spoil pile”—the dirt that had been removed from the hole—was right by the opening, rather than at least two feet away, as required. Also he didn’t see a steel “trench box” that was supposed to be inside the hole.