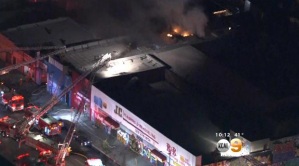 SOUTH LOS ANGELES (CBSLA.com) — Firefighters continued their investigation on Thursday surrounding the cause of a structure fire that broke out in an automotive upholster business on New Year’s Eve.

According to the Los Angeles County Fire Department, crews were sent around 6:21 p.m. Wednesday for report of four people trapped in a building fire located in the 6000 block of South Broadway Street.

Once on scene, firefighters located heavy flames burning in the back of a 93-year-old 4,600-square-foot, one and two story upholstery firm, where a family resided.

According to authorities, the fire broke out after business hours.

Firefighters explained there was limited access to the building, and the flames quickly extended through the roof.

They navigated among downed power lines to the back of the building, where the family and a small dog were located.

Crews reported they used power saws to remove window bars on the upper level of the building, and rescued the family and dog from the flames.

A man, woman, child and toddler all suffered smoke inhalation and were taken by ambulance for treatment.

Although the small dog appeared to be uninjured in the fire, officials turned it into the care of the Department of Animal Services.

About 116 firefighters were able to knock down the blaze in just over 30 minutes. They prevented it from spreading a nearby karate studio and church.

Due to the fire damage, authorities were unable to determine if smoke alarms were properly working.

Officials reported, however, that the building was not equipped with fire sprinklers.

Therefore, the Department of Building & Safety was called in to evaluate the integrity of the heavily damaged structure, officials said.

The loss of the building is still being estimated.