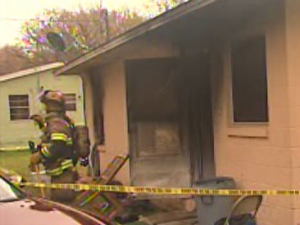 HASTINGS, Fla. — A young child was airlifted to a Gainesville hospital in critical condition after being rescued from a burning home on New Year’s Day, authorities said.

St. Johns County Fire Rescue was called to a house fire in the 300 block of Carter Street Thursday afternoon. When they got there, crews found smoking coming from the home and a 3-year-old outside, SJCFR said.

St. Johns County Sheriff’s Deputy Anthony Coleman and a neighbor were first to notice the home was in flames about 1:30 p.m. That’s when they jumped into action.

As firefighters arrived, Deputy Coleman was carrying the unresponsive boy out of a window. He was treated at the scene and then flown to Shands Gainesville in critical condition.

The neighbor was taken to Flagler Hospital in stable condition to be checked out for smoke inhalation, authorities said. There were no other injuries reported.

Damage to the home was limited, with firefighters able to douse the flames within minutes of their arrival, according to SJCFR.

The State Fire Marshal’s Office is looking into what might have started the fire. Meanwhile, the Department of Children and Families is investigating why the toddler was apparently home alone at the time.