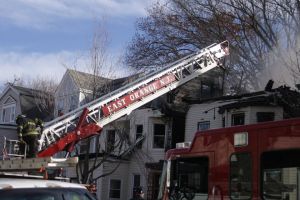 Several people are recovering after being pulled from a burning home in New Jersey.

A family, including 5 children, were rescued after a fire broke out in East Orange on Saturday night.

The fire started around 7:47 p.m. at 116 Hollywood Avenue. Upon arrival, flames were quickly spreading to the second floor to the third floor of the home. Crews then discovered an adult with second to third degree burns near the front door. Shortly after, they found five children, and two other adults trapped inside.

Together, nearly 35 firefighters from seven companies battled the blaze for several hours before it was completely put out.

The children were transported to a hospital to be checked out. Their ages have not yet been released.

Firefighters faced challenges with the cold weather, and were slipping and falling.